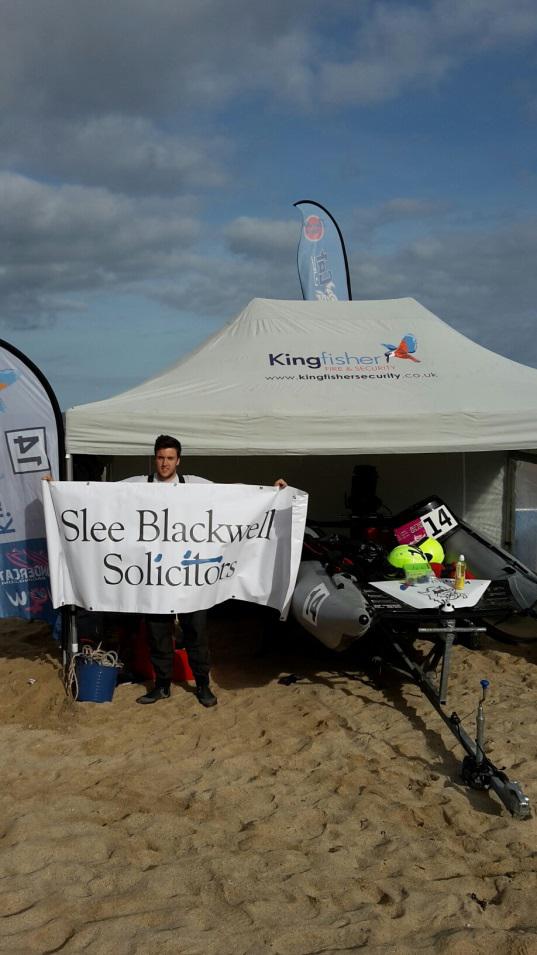 When he’s not studying law or working as a paralegal at our Bindon Road offices, Andrew is following his dream to be crowned a world champion powerboat racer.

Combining his skills as a pilot with his competitive urge to succeed Andrew, who is from Taunton, is hotly tipped for great things in this thrilling sport.

Andrew was recently flying the banner for Slee Blackwell Solicitors at Fistral Beach in Newquay where he was competing in the 5th and 6th rounds of the National Championships.

Thundercat Racing involves a small catamaran that can reach speeds of up to 70 mph.  These nimble craft are powered by a 2 Stroke 50hp Yamaha or Tohatsu engine. Boats come from a number of manufacturers such as Aquarius (Andrew’s personal favourite), Bobkat, Gemini, Ceaser and Infanta. They and are raced across 3 disciplines: Surf, Circuit, and Long-haul.

The competition in Newquay took place in very challenging conditions. Surf in excess of 10 feet coupled with high wind speeds provided competitors with a stiff challenge, issuing timely reminder that the sport is not for the faint-hearted.

But the conditions were the least of Andrew’s worries. After completing a practice session on the Saturday morning, the team discovered a small hole in the boat. Andrew had no alternative but to retire from the first two races of the day while he and his team set about repairing the damage.  Their swift work ensured that Andrew was able to compete in the last two races of the event, achieving a very credible 4th place in both.

Andrew went all out the following day, determined to make up lost ground. It started very well for the Somerset racer and after finishing second in his first race he comfortably qualified for the final.

However, disaster struck again. An injury to Andrew’s co-pilot forced him to retire from the final. A bitterly disappointed Andrew said,

“It was a massive blow to miss out on the final but these challenges are what make Thundercat Racing such exciting, adrenalin fuelled sport. We have learnt a lot from this and are confident that we can succeed on the national and international stages. My ambitions to become world champion are still very much on course.”

We hope Andrew and his team can get back to winning ways at the next event which takes place in Portsmouth on the 27 and 28 June 2015.

Taunton Thundercat Racer Bids for World Title
We use cookies on our website to give you the most relevant experience by remembering your preferences and repeat visits. By clicking “Accept”, you consent to the use of ALL the cookies.
Cookie settingsACCEPT
Manage consent